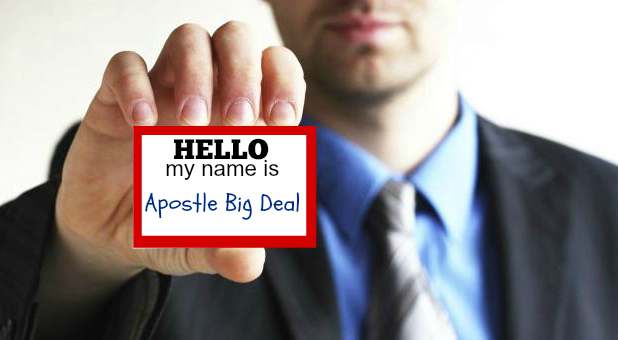 Last week when I was preaching in the nation of Iceland, I befriended three young foreign students from Africa who were visiting our conference near Reykjavik. I noticed these guys were sitting in the back of the auditorium, so I invited them to sit with me up front. They later admitted to me that I was the first preacher they’d ever met who greeted people before a service.

“In my country, most preachers come into the auditorium after the worship, and they don’t speak to anyone,” one of the brothers told me.

When I told these brothers they could call me Lee, they were shocked. They expected me to demand a long-winded ecclesiastical title.

I’m often asked if I have a title, and my answer doesn’t satisfy some people. I don’t consider myself a pastor because I travel so much. All kinds of labels have been pinned on me: reverend, prophet, apostle, even bishop.

Once I was introduced to a church as “Dr. Grady,” and I almost crawled under my seat. I only have a college degree. There are no letters after my name.

Today it seems we’ve developed a title fetish. For a while everyone in charismatic circles was becoming a bishop, and some were installed into this office with rings, robes and funny-looking hats. Then the same guys with the pointy hats started calling themselves apostles. Then the prophets got jealous and started calling themselves apostles too! I knew one lady who, not to be outdone, required people to call her “exalted prophetess.”

Now the latest fad is requiring church folks to address certain people as apostles. As in, “When apostle Holy Moly arrives, please only address him as, ‘apostle,’ and then make sure he is seated in a private room while his two ‘armor bearers,’ wearing dark glasses, guard his door.” I know of one popular preacher who sends his hosts a letter explaining that he must be called “apostle” anytime his name is used from the stage!

Some of these title-seekers have even invented an elaborate theology to go along with their ridiculous rule. They say you can’t receive the true anointing from a man of God if you don’t honor him with his right title.

Sounds so very oooh-oooh spiritual to the naive. But it’s charismatic garbage.

Jesus didn’t play this religious game, especially when he was around the grand poobahs of His day—the long-robed, nose-in-the-air scribes and Pharisees. After accusing them of loving the best seats in the synagogues, He pointed out that they loved to be called “Rabbi” by men (see Matt. 23:7).

Then He warned them: “But do not be called ‘Rabbi,’ for you have one Teacher, the Christ, and you are all brothers … For he who exalts himself will be humbled, and he who humbles himself will be exalted” (Matt. 23:8,12).

People have quibbled over these words for centuries, insisting that pride is what Jesus was rebuking, not titles. I would agree that Jesus was going to the root sin. But He was also asking these guys if they’d be willing to ditch their labels and act like normal people.

When I was in China several years ago, I met some amazing leaders who had planted thousands of congregations. They had also spent a lot of time in jail for their faith, and they’d been beaten with iron rods for preaching the gospel. They were the bravest apostles I’ve ever met.

But when I asked them if they used “apostle” as a title, one guy said: “We believe in those roles in the church. But we prefer to call each other ‘brother’ or ‘sister.'”

That settled the issue for me.

If these Chinese giants of the faith—and true apostles—don’t require to be addressed with titles, then Your Worshipful Grand Master Rev. Dr. Bishop Big Deal Jones who claims oversight of maybe four churches shouldn’t wear his ministry role around his neck like a tacky neon name badge.

If people can’t see the anointing on your life through your character, then don’t cheapen the gospel by wearing a title you don’t deserve.

I’m not saying people shouldn’t use reverend, minister or even bishop to identify their roles in the church. One of my mentors is a bishop, and he is one of the most humble men I know. But can we please dispense with the insecurity and the childish “I’m more important than you” appellations and get back to the simplicity of the gospel? Let’s get over ourselves!

Jesus is the King of kings, the Lord of lords, the Son of David, the Prince of Peace and the Apostle of our Confession. Yet when He came into this world, He laid aside His heavenly glory and took on the lowly name of Jesus. He wore no fancy robes. He demanded no titles. He had no “armor bearers.” He even bore His own cross until He was too weak to drag it to Calvary.

If we want to serve Jesus honorably, we must forsake our need for fame and cast our crowns at His feet.

Your ticket for the: Let’s Trade Our Titles for True Humility